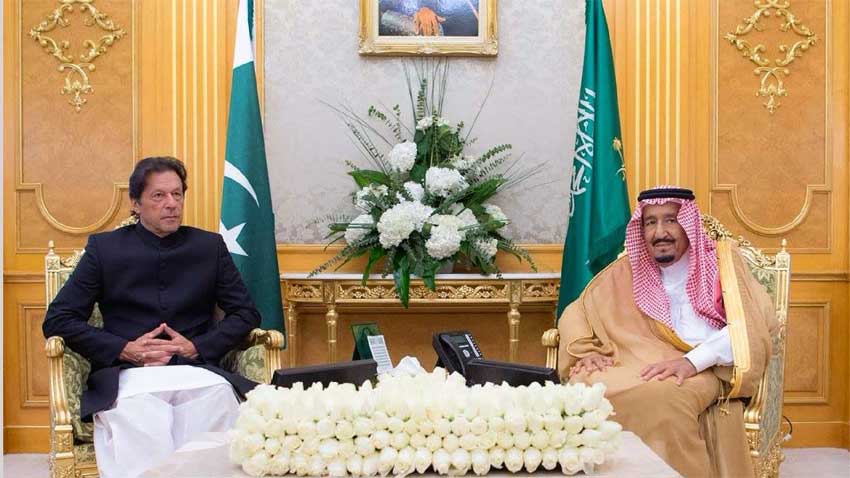 Pakistan and Saudi Arabia have reaffirmed their historical and brotherly ties, rooted in bonds of common religion, shared culture and values and quest for regional and global peace and security.

The Prime Minister was accompanied by the Foreign Minister Shah Mehmood Qureshi, Finance Minister Asad Umar, Information Minister Fawad Ahmed, and Advisor to the Prime Minister on Commerce, Abdul Razaq Dawood. He held meetings with Custodian of the Two Holy Mosques, His Majesty King Salman bin Abdulaziz and Crown Prince Muhammad bin Salman and discussed on ways to strengthen bilateral relations and on the regional political and security situation. They exchanged ideas on enhancing cooperation in political, defense, economic, commercial and cultural sectors, developing joint ventures in line with their respective developmental needs, strengthening collaboration in the human resource sector and addressing the issues faced by Pakistani expatriates in Saudi Arabia. They agreed on the need to promote peace and security to ensure progress, development, and prosperity.

The Prime Minister briefed the Saudi leadership on Pakistan’s successes and sacrifices in its fight against terrorism, highlighting the role of actors trying to destabilize Pakistan. Prime Minister Imran Khan strongly rejected the efforts to promote religious extremism, sectarianism, and terrorism.

The Saudi leadership congratulated Pakistan on its successful democratic transition and appreciated the Prime Minister’s ideal of transforming his country into a welfare state based on Islamic socio-economic principles. Saudi leadership assured Pakistan of its maximum assistance. The Prime Minister informed about the plight of the Muslims of Indian Occupied Kashmir, suffering grievous human rights violations.

Mentioning the report of the Office of the High Commissioner for Human Rights (OHCHR) on the human rights violations in Jammu and Kashmir, he stressed the need for Islamic solidarity and unity in raising the issue forcefully at the UN Human Rights Council.

Meanwhile,  Federal Minister for Information and Broadcasting Chaudhry Fawad Hussain met his Saudi counterpart Dr. Awad al Awwad at the King Faisal Palace in Jeddah, both the leaders discussed matters relating to bilateral interest.
Fawad Chaudhry expressed gratitude to the Custodian of Two Holy Mosques Shah Salman bin Abdulaziz and Saudi authorities for giving them a warm hospitality, a message received here from Jeddah on Wednesday said.
He said that the opening of Roza-e-Rasool and doors of the Khana Kaaba for Prime Minister Imran Khan and his delegation was an exceptional honor for Pakistan.
Fawad Chaudhry said that both the countries enjoyed very strong and fraternal relations which were poised to grow with time.
He said that the Information Minister’s visit to Pakistan was very important and had set the direction for coordination between the two ministries.
Dr Awwad said that there was a huge potential for media cooperation between the two countries and both the countries needed to take advantage of that opportunity.
Fawad Chaudhry said that Pakistani drama is a very famous product of Pakistani television industry and Pakistan was ready to provide them to the Saudi TV channels for broadcasting it in local language after dubbing or subtitling.
The Saudi minister showed interest in the idea and suggested to provide some drama serial to Saudi channels.
Fawad Chaudhry told the Saudi minister that a media university was being planned in Islamabad which would provide state-of-the-art education in all sectors of Media.
He suggested that Saudi Arabia might like to become a partner in the project and train its youth for the upcoming cinema industry in the Kingdom.
He said that joint film production could be another area where both the ministries could jointly work.
Both the leaders also agreed on a joint media strategy to combat extremism. Fawad Chaudhry said that the real war against the extremism had to be fought through media and we needed to have a joint media narrative against it.

Imran Khan, in his first foreign trip since he took charge as PM last month, has left on a two-day visit to Saudi Arabia and the United Arab Emirates today.  Those accompanying him include Foreign Minister Shah Mahmood Qureshi, Finance Minister Asad Umar, Minister for Information and Broadcasting Fawad Chaudhry and Advisor on Commerce Abdul Razak Dawood. Due to the presence of Fin. Minister in PM’s delegation, savants are insinuating that the principal objective of the visit is to seek economic bailout package in order to fill Pakistan’s empty coffers with petro/pilgrimage dollars. It is pertinent to mention here that the Pak PM was invited by King Salma Salman bin Abdulaziz and Crown Prince Mohammad Bin Salman. According to details, a banquet will be hosted by the King for PM at Royal Court; OIC Secretary-General  Dr. Yousef bin Ahmad Al-Othaimeen is also scheduled to call on the PM.  After performing Umrah Imran Khan and his delegation will proceed to Dubai on Wednesday evening. He was invited by UAE Crown Prince Mohammad bin Zayed Al Nahyan Crown Prince.  He will be discussing bilateral issues with the Crown Prince but is unlikely to watch Indo-Pak Cricket Match. (Published on 18th September 2018)