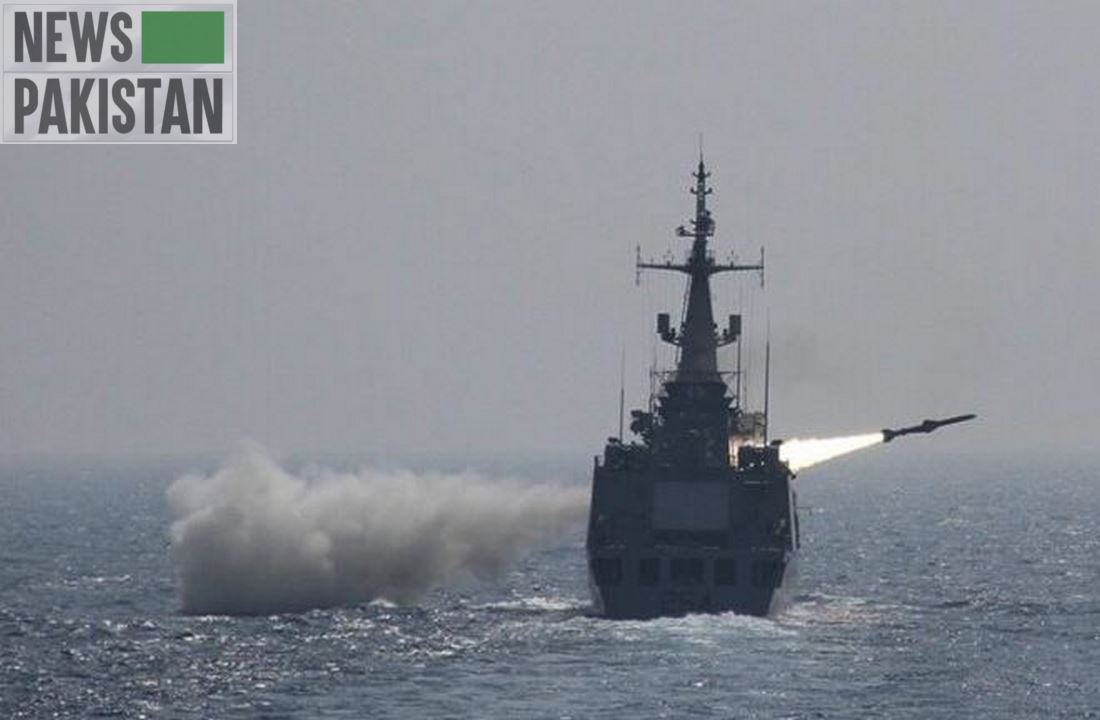 BEIJING: Chief of Naval Staff of Pakistan Admiral M Amjad Khan Niazi has said that the interaction between the navies of Pakistan and China provided an opportunity to enhance interoperability, share experience to optimally utilize common sensors, iron out procedures and “further elevate our relations.”

In that regard, the Sea Guardian series of exercises serve the objectives of fostering interoperability and sharing professional experience to deal with contemporary traditional and non-traditional security threats, he said in an exclusive interview with Global Times.

Pakistan Navy plans to host the AMAN-23 multinational maritime exercise in February this year, with the Chinese Peoples Liberation Army (PLA) Navy, having taken part in previous editions, are again expected to participate.

China and Pakistan have been maintaining close naval and maritime exchanges and cooperation in recent years, including joint drills.

Elaborating briefly on the upcoming exercise, Admiral Niazi said that Exercise AMAN was the premier multinational maritime exercise of Pakistan Navy which “has been conducted biennially since 2007.”

“The exercise is conducted with the aim to develop synergy between participating naval units to tackle maritime security challenges by enhancing interoperability between regional and extra regional navies at different levels of technological prowess”, he added.

During the harbor phase, various professional and social activities will be conducted to share experiences on contemporary maritime security challenges and coordinate modalities of sea exercises.

The sea phase includes exercises and an international fleet review to demonstrate unified resolve against maritime terrorism, piracy, and other prevalent illicit activities at sea.

Admiral Niazi said that Pakistan Navy was expecting a wide range of participation from across the globe, as 43 countries participated in Exercise AMAN-21, despite COVID-19 restrictions.

He expressed the confidence that Exercise AMAN-23 would contribute significantly in fulfilling the common desire of participating maritime nations for regional peace and shared prosperity through such collaborative efforts.

Regarding purpose and goals for conducting the exercise, he said that there were a number of non-traditional threats that prevailed in the wider Indian Ocean region such as terrorism, piracy, drugs smuggling, and arms trafficking.

“The vastness of the oceans makes the maritime arena an attractive avenue for illegal activities and no country has the capability to single-handedly counter these challenges.

“Collaborative maritime security has thus evolved as an established norm and the Pakistan Navy is actively involved in international and regional efforts. Exercise AMAN is Pakistan’s humble but focused initiative in this regard.”

“The word AMAN in Urdu means ‘Peace’ and the motto of the exercise is ‘Together for Peace’ which demonstrates the importance and united resolve of all participating countries and partners in this cause”, he added.

Admiral Niazi said that the AMAN series of multinational exercises was significant in fostering regional cooperation for the maintenance of good order at sea, improving interoperability, sharing experiences, and exhibiting common resolve against terrorism and organized crimes in the maritime domain.

“Participation in this exercise has been growing at a steady pace since its inception, with the exception of AMAN-21 in view of the COVID environment.

“The increased participation reflects growing trust in the value of the exercise and acknowledgment of the Pakistan Navy’s efforts in promoting collaboration between regional and extra regional navies in the face of diverse non-traditional security threats”, he added.

On the importance of holding joint exercise, he said that Pakistan Navy-PLA Navy relations were a reflection of Pakistan-China strategic ties and range from training exchanges to high-level visits, port calls by ships, navy-to-navy expert-level staff talks, and the regular conducting of bilateral exercises.

He highlighted that the PLA Navy was among the world’s leading navies that now operates regularly in the Indian Ocean region, making collaborative maritime security our common interest for ensuring maritime security in the region.

During Exercise Sea Guardian-2 conducted off Shanghai from July 10 to 13, 2022, the PNS Taimur along with PLA Navy frigates Xiangtan and Shuozhou, supply ship Qiandaohu, submarine, and aviation units including early warning aircraft and fighter aircraft participated.

The evolutions at sea included joint maneuvers, anti-surface, anti-air, and anti-submarine drills which provided a useful opportunity to strengthen naval ties and enhance interoperability between the two navies, he said.

About Pakistan International Maritime Expo and Conference, or PIMEC, he said that it was an initiative of the Pakistan Navy to showcase the potential of Pakistan’s maritime sector and draw attention to the contribution that the maritime industry can make toward the development of our blue economy.

The expo aims to bring together stakeholders and companies, both international and domestic, from various maritime fields to exploit the potential offered by the blue economy.

The three-day expo will provide an opportunity for business-to-government (B2G) and business-to-business (B2B) interactions for joint ventures and investments in Pakistan’s maritime sector.

A maritime conference will also be conducted during the PIMEC where eminent speakers, experts, and representatives, both domestic and foreign, and from both the public and private sectors, will share their views on contemporary maritime issues and suggest viable options for developing countries like Pakistan to exploit the true potential of the blue economy, he added.

On China’s participation in PIMEC, he said that since PIMEC aims to bring together stakeholders and companies from diverse maritime fields, I reckon it will provide a unique opportunity for joint ventures and investments in the maritime sector.

In this regard, the Chinese maritime sector has witnessed exponential growth over the years as evidenced by being the leading manufacturer of shipping equipment.

Furthermore, China has more than 30 major ports and seven out of 10 of the world’s busiest ports are located in China.

With these maritime credentials, the participation of the Chinese maritime sector in the maiden PIMEC will provide an ideal opportunity for local as well as international companies in exploring avenues of collaboration to promote investments in the maritime sector of Pakistan, he said.

Commenting on the delivery of two frigates by China, he said that the acquisition of the Type 054A/Ps is a symbol of enduring friendship and historical affinity between China and Pakistan.

The Type 054A/P is one of the latest multi-role frigates of Chinese origin equipped with state-of-the-art weapons and sensors that include CM-302 SSM and LY-80 SAMs as well as the advanced anti-submarine warfare suite and combat management system.

These ships are equipped to operate under multi-threat scenarios. The first two ships of this class, PNS Tughril and the PNSÂ Taimur, were inducted into the Pakistan Navy in December 2021 and June 2022 respectively, while the remaining two ships are also on track to join the Pakistan Navy Fleet in 2023.

These ships are being integrated into Pakistan Navy operations and will be the mainstay in the Pakistan Navy Fleet in the coming years ensuring seaward defense and protection of Pakistan’s vital sea lines of communications, he added.

About the cooperation plan between the two navies in terms of equipment procurement particularly the submarine project, he said that the Pakistan Navy’s development strategy is based on “progressive capability enhancement” to create a balanced, potent, and combat-ready force to meet evolving threats.

As part of this modernization, the Pakistan Navy is replacing its existing aging platforms with acquisitions from friendly countries along with the transfer of technology for in-country construction.

In this regard, collaboration with China has been strengthened with the procurement of F-22P frigates, Fast Attack Craft (Missile), helicopters, a survey ship, and medium-altitude long-endurance unmanned combat aerial vehicles.

The ongoing planned induction of Type 054A/Ps and Hangor-class submarines will further cement naval ties between the two countries. The Pakistan Navy will continue to engage Chinese firms to meet its operational requirements in the future, he said.

Admiral Niazi said that the Hangor-class submarine project is making progress steadily and the submarines are under various stages of assemblage in Pakistan and China.

These conventional-type modern submarines are equipped with the latest weapons and sensors.

The induction of Hangor-class submarines with air-independent propulsion (AIP) system onboard will significantly enhance their submerged endurance capabilities.

The project is continuing as per the timeline despite certain delays due to COVID-19 and technical intricacies.

Admiral Niazi said that the PLA Navy has shown remarkable progress during the last two decades to achieve the goal of becoming a blue-water navy.

It became the world’s largest navy in terms of size in 2015 and has been growing ever since through the addition of state-of-the-art platforms, weapons, and sensors.

The commissioning of 28 ships in 2021 alone is undoubtedly a manifestation of an impressive pace of shipbuilding capacity by China.

Developments in the field of submarines, aviation, and hypersonic missile technology also bear testimony to the PLA Navy’s drive to transform into a credible and modern force.

“Moreover, the PLA Navy’s role in maintaining peace and stability in the Indian Ocean region and counter-piracy operations while keeping from BLOC politics is creditable.

“We look forward to strengthening our historic relationship with the PLA Navy and cooperating closely to promote peace and stability in the Indian Ocean region while preserving good order at sea,”he added.

To a question, he said the Pakistan-China friendship spans more than seven decades and is imbued with a high level of trust and commonality of interests. It has matured into a comprehensive strategic partnership at the national level.

“In this regard, it is heartening to see the PLA Navy grow into a blue-water navy with a variety of modern platforms in its inventory, including the three aircraft carriers.

The latest PLA Navy aircraft carrier, the Fujian, designed by Chinese engineers and equipped with electromagnetic aircraft launch systems, is a significant leap in the field of naval technology.

In this regard, keeping in view the strategic relations of Pakistan and China as iron-clad brothers, we wish for the PLA Navy to grow from strength to strength and continue with its modernization efforts to safeguard its national interests, as per evolving geo-strategic dictates.

He said that over the last decade, the PLA Navy has grown exponentially and transformed into a highly competent and combat-ready force.

“Based on my recent interactions, I have found PLA Navy personnel highly professional, determined, and well trained in line with the modern trends,” he added.

He said that the conduct of PLA Navy ships at sea highlights their professionalism and adherence to well-defined procedures which indicate the high standards of PLA Navy training institutes.

“It is encouraging to observe similar traits in Pakistan Navy personnel that have availed themselves of various training courses in China.

“With this ongoing evolution in both material and quality human resources, I have no doubt that the PLA Navy is on its way to becoming one of the finest leading navies in days to come,” he concluded.

Lunar Eclipse over part of  Pakistan on March 23rd