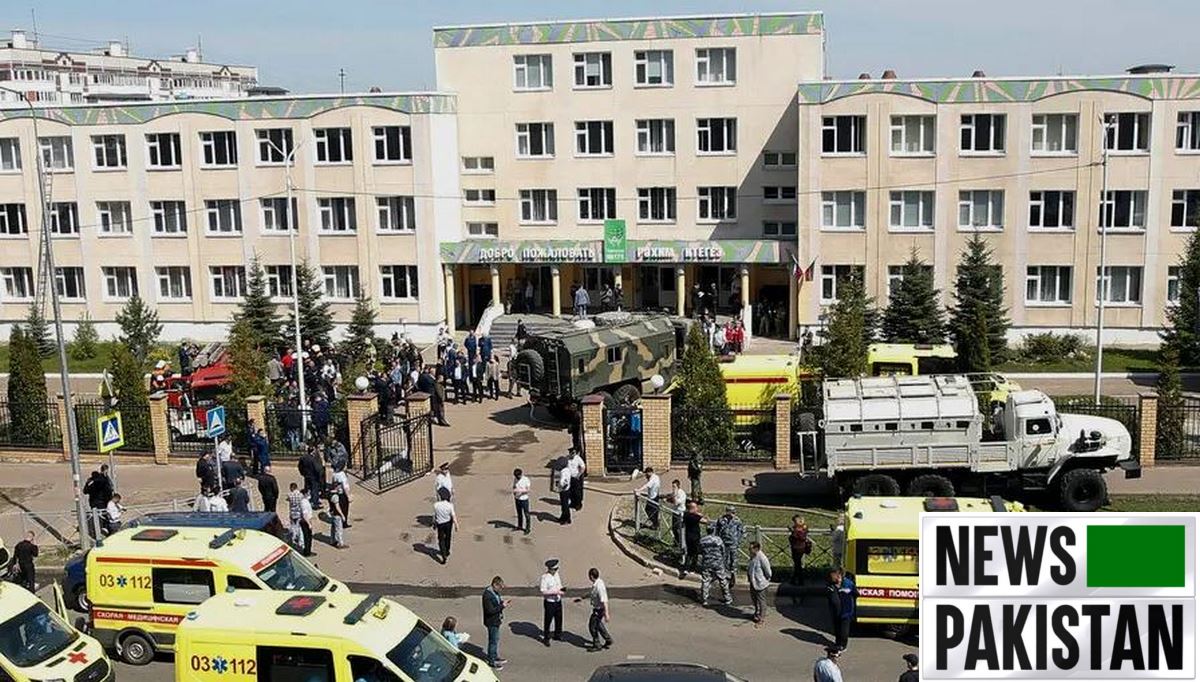 “President Putin deeply mourns the deaths of people, children at a school where there was a terrorist attack by a person, who apparently belongs to a neo-fascist group,” Kremlin spokesman Dmitry Peskov told reporters.

“The president wishes for the recovery of those injured as a result of this inhuman terrorist attack,” Peskov added.

The death toll has risen to 15 people, including 11 children, after a man opened fire Monday at his former school in central Russia, authorities said.

The attack was the latest in a series of school shootings that have shaken Russia in recent years and came with the country on edge over efforts to mobilise tens of thousands of men to fight in Ukraine.
Russian President Vladimir Putin denounced the “inhuman terrorist attack” in the city of Izhevsk, the Kremlin said, adding that the shooter “apparently belongs to a neo-fascist group”.
According to investigators, the attacker “was wearing a black top with Nazi symbols and a balaclava” when his body was discovered.
He was later identified as a local man born in 1988, who graduated from the school.
Investigators have said two security guards and two teachers were among the victims, while the attacker “committed suicide”.

Authorities previously announced a death toll of seven children and six adults but did not specify if that included the suspected shooter.
Investigators said they were searching his home and probing his “adherence to neo-fascist views and Nazi ideology”.
The region’s governor Alexander Brechalov confirmed there were “casualties and wounded among children”, speaking in a video statement outside school No88 in Izhevsk.
Rescue and medical workers could be seen in the background, some running inside the school with stretchers.
Brechalov declared a period of mourning in the region to last until Thursday.
A city of around 630,000 people, Izhevsk is the regional capital of Russia’s Udmurt Republic, located around 1,000 kilometres (620 miles) east of Moscow.
The attack came just hours after a man had opened fire and severely wounded a recruitment officer at an enlistment centre in Siberia.
Russia’s last major school shooting was in April, when a man opened fire in a kindergarten in the central Ulyanovsk region, leaving a teacher and two children dead.
The shooter, described as “mentally ill”, was later found dead, with officials saying he had shot himself.

Mass shootings at schools and universities in Russia were rare until 2021, when the country was rocked by two separate killing sprees in the central Russian cities of Kazan and Perm that spurred lawmakers to tighten laws regulating access to guns.
In September 2021, a student dressed in black tactical clothing and helmet armed with a hunting rifle swept through Perm State University buildings killing six people, mostly women, and injuring two dozen others.
The gunman resisted arrest and was shot by law enforcement as he was apprehended and moved to a medical facility for treatment.
It was the second such attack that year, after a 19-year-old former student shot dead nine people at his old school in the Kazan in May.
Investigators said that the gunman suffered from a mental impairment, but was deemed fit to receive a licence for the semi-automatic shotgun that he used.
On the day of that attack Putin called for a review of gun control laws and the age to acquire hunting rifles was increased from 18 to 21 and medical checks were strengthened.
Authorities have blamed foreign influence for previous school shootings, saying young Russians have been exposed online and through television to similar attacks in the United States and elsewhere.
Other high-profile shooting cases have taken place in Russia’s army, putting the issue of hazing in the spotlight in the country where military service is compulsory for men aged between 18 and 27.
In November 2020, a 20-year-old soldier killed three fellow servicemen at a military base near the city of Voronezh. In a similar attack in 2019, a young recruit shot dead eight servicemen, saying he faced bullying and harassment in the army.