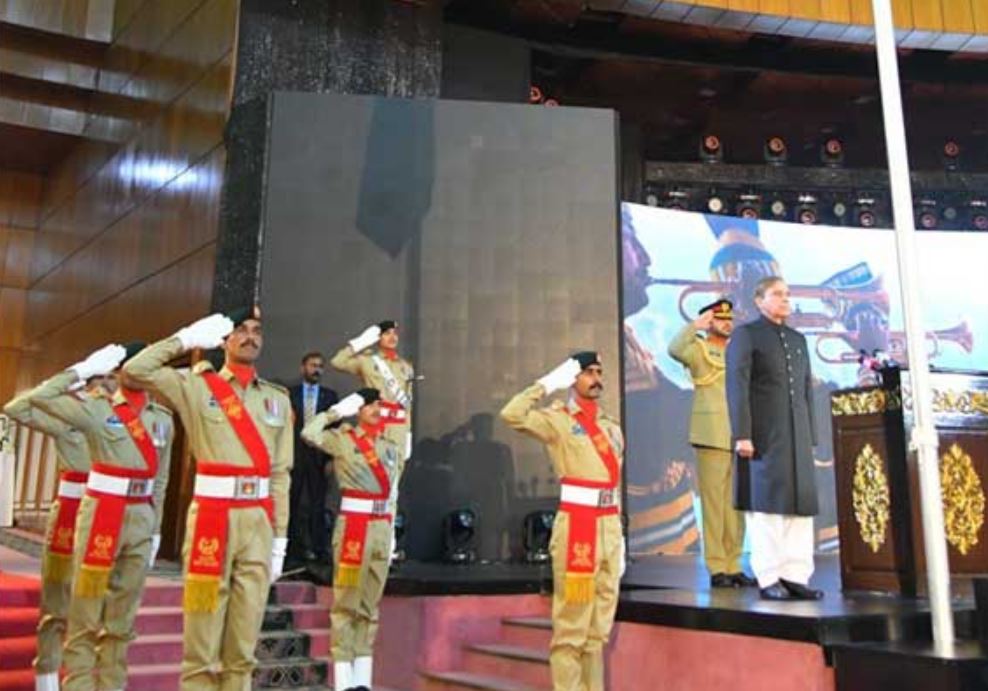 ISLAMABAD: The government on Sunday released the re-recorded national anthem which reflected updated inclusivity in voices and expression while ensuring the sanctity of the original words and the musical composition.

The updated version of national anthem was officially unveiled by Prime Minister Shehbaz Sharif at the flag hoisting ceremony held here at the Jinnah Convention center in connection with the 75th anniversary of Pakistan’s independence.

According to a press release, the first national anthem was launched by the country’s first prime minister Liaquat Ali Khan in 1954 and Shehbaz Sharif is the second PM who re-launched its updated version recorded with modern technology and instruments after 68 years.

The Shehbaz-led government has the credit of ensuring timely completion of the process of re-recording the national anthem and launching instrumental versions and a new video featuring new vocal version on the diamond jubilee of Pakistan.

The National Anthem Steering Committee, formed in June 2021 and further mandated by the present government in April 2022, worked to create a re-recording of the original national anthem that reflects updated inclusivity in voices and expression while ensuring the sanctity of the original words and the musical composition.

In planning to produce new vocal and instrumental versions of the unchanged original words and composition, the Steering Committee applied an all-inclusive, gender-balanced approach and enlisted vocalists from diverse regional, cultural and ethnic backgrounds, from all religious faiths and musical genres.

The Ministry of Information and Broadcasting and Inter-Services Public Relations (ISPR) synchronized and harmonized in the re-recording of anthem through the best possible musicians serving in the armed forces brass bands.

The re-recording of the national anthem includes 48 musicians from the army, air force and navy bands who skilfully played the musical instruments; a choir of 30 vocalists from the National Academy of Performing Arts (NAPA), and over 125 vocalists representing all provinces, regions and faiths.

It was imperative that the re-recording of the national anthem was rendered correctly while maintaining its historic sanctity and rich legacy. To this end, state-of-the-art digital technology was used to record multiple tracks and to complete the mixing and fusion to create clear, distinct, powerful vocal and instrumental versions. A colourful, kaleidoscopic video featuring the new version has also been produced by NUM Films.

The Chairman of the Steering Committee of the Re-recording of the National Anthem of Pakistan is Senator Javed Jabbar. The 16 members comprise of 10 persons who served on a voluntary basis and five senior civil officials and one senior military official. The Secretary of Information Ministry is also a member. The audio sub-committee includes Arshad Mahmud, Brigadier Imran Naqvi (ISPR), Rohail Hyatt, Talha Ali Khushwaha, Ustad Nafees Ahmed, Layaqzada Layaq and Dr. Zulfiqar Qureishi. The video sub-committee’s convenor is Satish Anand.