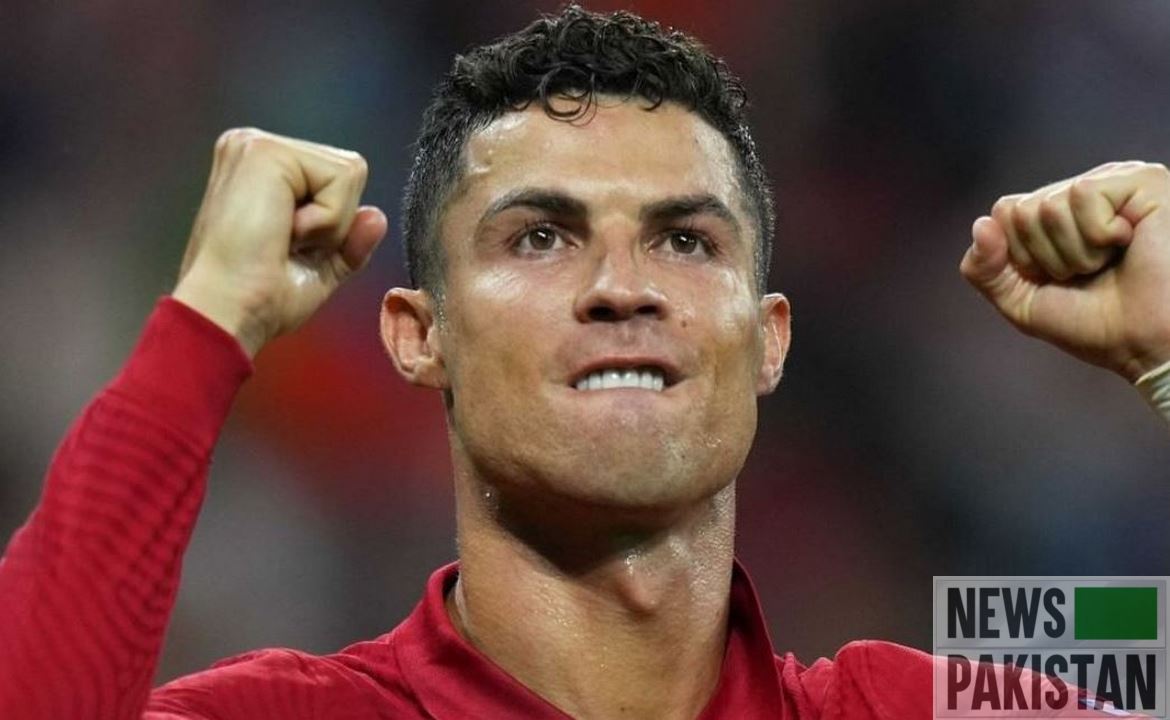 DOHA: Cristiano Ronaldo became the first man to score at five World Cups on Thursday after opening the scoring in Portugal’s World Cup clash with Ghana.

The 37-year-old set the record when he smashed home a penalty in the 65th minute at the 974 Stadium in Doha to give Portugal the lead in the Group H clash with the Black Stars.

Ronaldo overtakes Pele and Germans Uwe Seeler and Miroslav Klose, who all scored in four World Cups.
Ronaldo also extended his own world record tally of international goals to 118.

Cristiano Ronaldo won the spot-kick himself when he was brought down by a challenge from Mohammed Salisu.

Manchester United announced this week that Ronaldo will leave with immediate effect after he criticized the club and manager Erik ten Hag in a TV interview, but he has showed no signs of strain from the bitter end to his time at Old Trafford.

Ronaldo became the first man to score in five different editions of the World Cup as he slotted home a penalty to help Portugal down Ghana 3-2 in their Group H clash.

The typically ice-cold spot-kick was Ronaldo’s eighth career goal at the World Cup and comes after a tumultuous week which saw the star forward make a sensational exit from Manchester United after weeks of tensions with the club.

But there was controversy surrounding the penalty, which was awarded after Ronaldo crashed theatrically to the turf following minimal contact with Ghana defender Mohammed Salisu.

Andre Ayew raised hopes for Ghana with a 73rd minute equaliser but goals from Joao Felix and Rafael Leao ensured a winning start for the Euro 2016 champions. Osman Bukari scored a late consolation for Ghana.

Later on Thursday, World Cup favourites Brazil launch their bid for a record-extending sixth global crown against a dangerous Serbia side.

Coach Tite will be wary of his Group G opponents after witnessing shock defeats for Argentina and Germany already in Qatar.

“In my opinion these players (attackers) will help Neymar because they can divide up the responsibility and create space for him,” said veteran Brazil skipper Thiago Silva.

“The atmosphere in the squad is super-healthy,” he added. “The mixture of young players and more experienced ones creates a great connection.”

Serbia appear a more dangerous proposition than four years ago, when they also faced Brazil in the group stage but lost 2-0 and exited in the first round.

“We are afraid of nobody in the world, not even Brazil,” said Serbia coach Dragan Stojkovic, who hopes prolific Fulham striker Aleksandar Mitrovic will be fit for the match at the Lusail Stadium.

Switzerland and Cameroon, also in Brazil’s group, kicked off Thursday’s action in Qatar, with the Swiss winning 1-0 courtesy of a goal from Cameroon-born Breel Embolo.

The forward struck three minutes into the second half at Al Janoub Stadium as Switzerland secured a vital three points.

Granit Xhaka and Remo Freuler worked the ball out wide on the right to Xherdan Shaqiri, whose low cross into the area was swept home by an unmarked Embolo, who chose not to celebrate against his birth country.

“It’s quite special for him because of his links to Cameroon — I’m very happy he’s playing for us,” said Swiss goalkeeper Yann Sommer. “He’s always right there when you need him.”

Defeat condemned Cameroon to their eighth straight loss at World Cups — a miserable run stretching all the way back to 2002.

In Thursday’s other game, the return of Tottenham star Son Heung-min was not enough to inspire South Korea to victory with the Asian side grinding out a 0-0 draw with Uruguay in Group H.

The striker wore a mask to protect the injury he suffered while playing in the Champions League for Spurs as South Korea took a point in their opener.

The 30-year-old had surgery for fractures around his left eye just three weeks ago and this was his first time to play competitively since.

“I feel ok, I’m not the only one to wear a mask, some players wear masks. I feel comfortable,” he told reporters afterwards.

“I’m just happy to be here, happy with the mask that I could play, it’s just so amazing.”

Meanwhile, the shockwaves from Germany’s monumental upset defeat to Japan on Wednesday continued to reverberate, with coach Hansi Flick warning no member of his team was safe after the 2-1 loss.

The four-time champions, who next face Spain, are facing a nightmare scenario of a second consecutive group-stage exit after their early departure in Russia in 2018.

“You can understand that we are discussing every matter of personnel and every position,” Flick said.

Pakistan to clash with West Indies in the first ODI today

My father wanted me to play for Pakistan: Usman Qadir