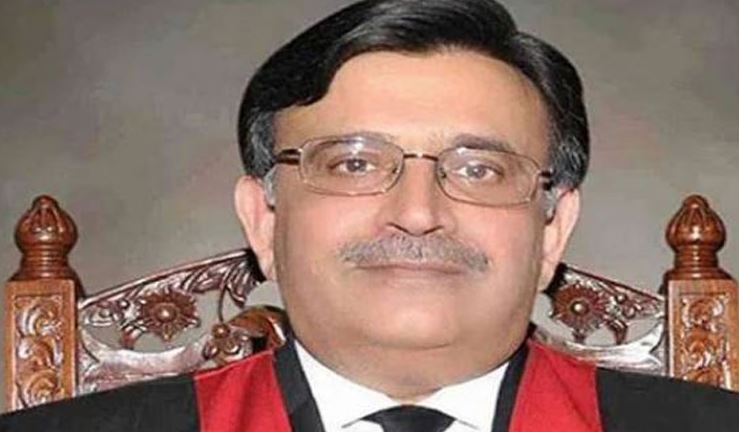 ISLAMABAD: SCP will announce its judgment on the deputy speaker’s ruling at 7.30pm Thursday, 7th of April, 2022.

ISLAMABAD: SCP security has been beefed-up ahead the announcement of the verdict apropos deputy speaker’s ruling on no-confidence resolution.

CJP Umar Ata Bandial said that the proceedings of the court were being held under Article 184 (3) as this was a public interest case. Apex Court observed that the deputy speaker’s ruling regarding dismissing the No-Confidence Resolution was wrong.

Attorney General of Pakistan Khalid Jawed Khan has stated that he would not defend the deputy speaker’s ruling. Court also noted that negative comments were being posted against the SCP in the Social Media (blaming it of delaying the announcement of verdict in the said case).

Leader of the Opposition in the National Assembly Shahbaz Sharif while speaking at the rostrum termed the deputy speaker’s ruling as unconstitutional and stated that if the SCP rules it out the No-Confidence Resolution against PM Imran Khan would be restored.

Shehbaz Sharif also pointed out that constituencies could not be dissolved during the proceedings of No-Confidence Resolution.

Imran Khan, against whom the opposition had tabled No-Confidence Resolution in the National Assembly (on 8th day of March, 2022) has stated that he would be accept the verdict of the Supreme Court of Pakistan.

Whereas,  government’s lawyers Dr Babar Awan, Senator Ali Zafar and Imtiaz Siddiqui were asked to complete their arguments on Wednesday (6th of April, 2022).

It was observed that once the no-confidence motion was presented it can be dismissed only by means of voting. Justice Mandokhel said that political parties should also attempt to decipher why their members leave the party.

Earlier, on Tuesday (5th of April, 2022) during the hearing CJP stated that the Apex Court would only focus on the legality of the ruling on the No-Confidence Resolution against the PM. CJP said that presently they were looking at the law and Constitution. CJP said all respondents would be told to focus on that matter at the moment.

The Supreme Court of Pakistan that sought the relevant record of the 3rd April proceedings of National Assembly, maintained that the Apex Court preferred that a decision be taken on that matter only and the court wanted to see if it could review the ruling of the Deputy Speaker Qasim Suri.

Raza Rabbani, citing Article 95 of the Constitution, argued that the No-Trust-Resolution could not be dismissed sans voting on it. Rabbani pointed out that the then information/law minister Fawad Chaudhry (speaking on a point of order during 3rd April session) had talked about foreign conspiracy based on a letter though that was not on the Agenda.

Senator Rabbani pointing out that during the No-Trust process assemblies could not be dissolved maintained that since No-Trust Resolution had also been submitted against the Speaker Asad Qaiser, his power was limited.

Rabbani urged the court to dismiss the deputy speaker’s ruling and to restore the National Assembly, adding that the minutes of the National Security Committee and the ‘threat letter’ should also be presented.

PML-N counsel Makhdoom Ali Khan pointed out that 152 MNAs had signed the No-Trust Resolution and 161 had supported its tabling. A debate on the No-Trust-Motion was not held on 31st day of March nor the voting conducted on 3rd day of April, 2022 although such motion could not be dismissed after it was tabled.

Makhdoom Ali Khan further pointed out that the Opposition Leader Shehbaz Sharif was not allowed to express his views on the day of voting. The Apex Court adjourned the hearing till Wednesday 6th April, 2022. CJP Bandial had said that the apex court would not interfere in matter of the state and foreign policy and would only determine the legality of the deputy speaker’s ruling.