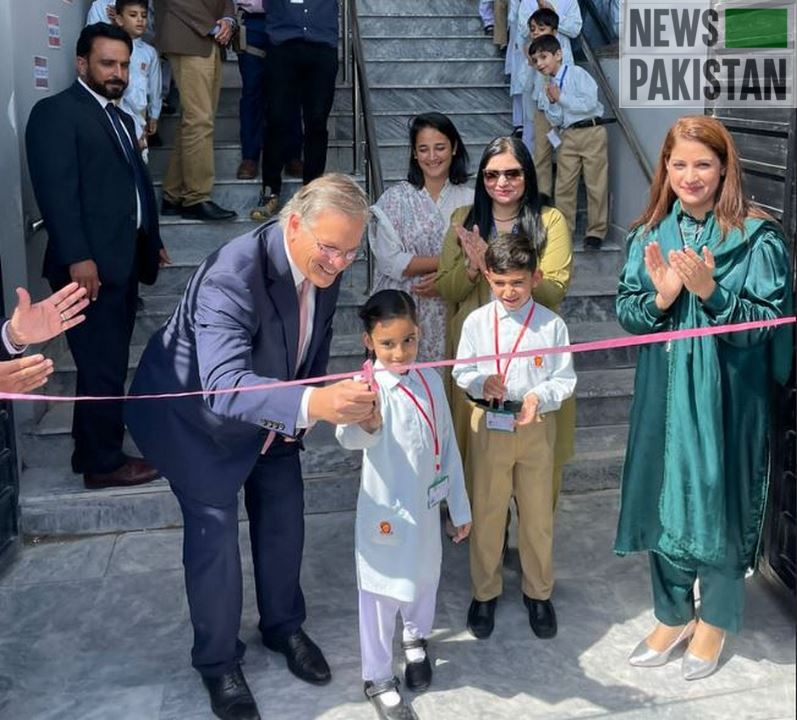 In Muzaffarabad, Ambassador Blome laid a wreath to honor the victims of the 2005 earthquake and stated that “during the 75 years of our partnership, the United States has always stood by Pakistan, particularly when it’s needed most.”

Following the earthquake, the US government and private sector provided significant humanitarian relief and reconstruction, and the US military delivered relief supplies.

In his meetings, Ambassador Blome emphasized that the United States is continuing this strong tradition of supporting Pakistan during times of great need, having thus far contributed more than $66 million in cash, food, shelter, and health assistance in response to the devastating flooding.

US support has included a military airbridge that delivered lifesaving supplies to the people of Pakistan.

At the University of Azad Jammu and Kashmir, Ambassador Blome visited the Lincoln Corner Muzaffarabad, which is celebrating its 15th anniversary.

This space provides students and the local community with a multi-media resource center to listen to expert speakers, take part in STEM activities, practice English-language skills, and learn about the United States.

The Ambassador also joined university leadership to see previous US government funded projects on campus, including a building completed in 2017, which features laboratories, classrooms, conference rooms, energy-efficient and green-building concepts.

“The Quaid-e-Azam Memorial Dak Bungalow symbolizes the cultural and historical richness of Pakistan and was famously visited by Jinnah in 1944. I’m honored to visit during my first trip to AJK,” the Envoy Tweeted. “Damaged during the 2005 earthquake, the local government has beautifully restored this heritage site for the benefit of the community and visiting travelers“.

“I’m honored to have the chance to visit the 17th century Muzaffarabad Fort – AKA the Red Fort – in person. It was wonderful to see the impact of local government efforts to restore & revitalize this important cultural heritage site“, Donald Blome Tweeted.

While in Muzaffarabad, the Ambassador also visited the Quaid-e-Azam Memorial Dak Bungalow, the Red Fort, and the Jalalabad Garden, symbols of the cultural and historical richness of Pakistan.

Meeting with members of the 950-person strong Muzaffarabad chapter of the Pak-US Alumni Network, Ambassador Blome praised them for the passion they bring to their communities and the bilateral relationship, discussing the 60 recent projects they’ve done on topics as varied as climate change, women’s empowerment, and entrepreneurship.

During his visit, the Ambassador also met officers from the Pakistan Army 12th Infantry Division to discuss assistance activities for local communities.

In Bagh, Ambassador Blome joined representatives from US healthcare IT services company MTBC/CareCloud to inaugurate the HeadStart School, which enrolls more than 750 students.

This purpose-built campus will strengthen the quality of education available to residents in Bagh and provide additional opportunities to the community.

MTBC/CareCloud has offices throughout Pakistan, but its Bagh facility is its largest in Pakistan, with 2,525 employees – almost 20 percent of whom are women.

The United States is Pakistan’s largest export market and American companies have been leading investors in Pakistan for the past 20 years.

In the past year alone, US investment in Pakistan increased by over 50 percent, reaching its highest level in over a decade.

Ambassador Donald Blome took to the Twitter on Sunday (2nd of October, 2022) to inform that US has helped 32 historic and cultural sites around Pakistan, totaling more than $7.1million.

“These projects show the respect & admiration the US has for Pakistan, its culture, and its people,” Blome Tweeted.

Ambassador Blome also spoke with local artisans to learn about their craft, admiring the fine work from traditional techniques that have been passed down for generations.