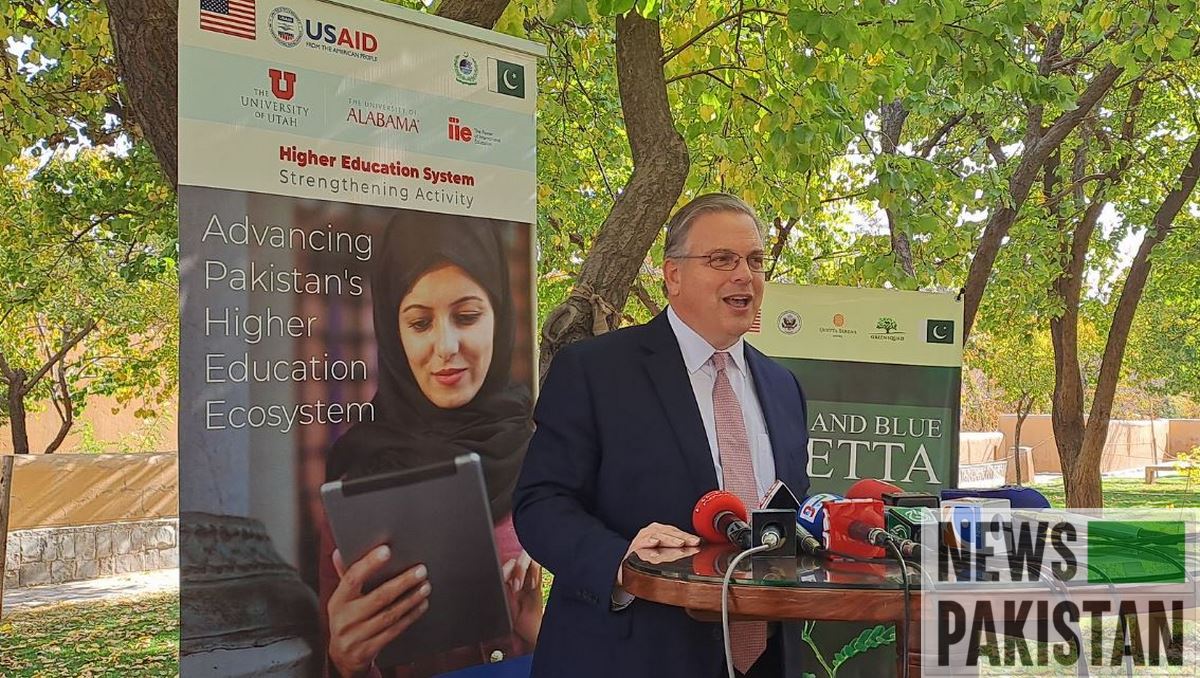 During his visit, Ambassador Donald Blome discussed US efforts to combat the effects of climate change through a Green Alliance with diverse partners in Pakistan and underscored the strong cooperation between the United States and Pakistan on promoting economic development through higher education and women’s empowerment.

At the event, the Ambassador highlighted that the US government had provided more than 97 million dollars in flood-related assistance to Pakistan this year, including to individuals and communities in need in Balochistan.

“But we know that the effects of the flooding are far from over, and every nation faces the threat of climate change. So, we’re working with diverse partners to increase Pakistan’s resilience to climate change through a Green Alliance,” Ambassador Donald Blome said.

During the trip, Ambassador Blome also met the leadership from the Balochistan University of Information Technology, Engineering and Management Sciences and the Sardar Bahadur Khan Women’s University to discuss how US government support has helped them respond to local economic development needs in their academic programs.

The United States, through USAID, has provided scholarships to almost 300 students—56 percent of them women—to pursue higher education at the institutions and further their communities’ economic development.

In remarks at the launch event of Entrepowered—Women Can Do, a program that will provide $350,000 of seed funding to women entrepreneurs in Balochistan, Ambassador Blome said: “The United States believes that empowering women is a strategic investment in the future for both private citizens and the global economy.

” By working together on projects like Entrepowered, we can advance women’s equality in the business sector and unleash a vast potential that will help bring prosperity to Quetta and Balochistan.”

This fosters economic development for Afghan refugees and local artisans.

It is pertinent to mention here that since 2009, UNHCR, with US funding, has implemented 251 projects in Balochistan to provide infrastructure upgrades to schools, water and sanitation improvements, and health facility upgrades for both Afghan refugees and Pakistani host communities.

They discussed the long history of Pak-US relations in diverse areas.

Ambassador Donald Blome emphasized opportunities to work together today, including to build a Green Alliance to support Pakistan’s transition to cleaner and sustainable forms of energy, and to advance shared interests in trade, investment, health security, climate change, inclusive governance and regional security.

The United States has a broad, deep, and long-term partnership with the people of Balochistan Province spanning the education, economic, health, and rule of law sectors and beyond.