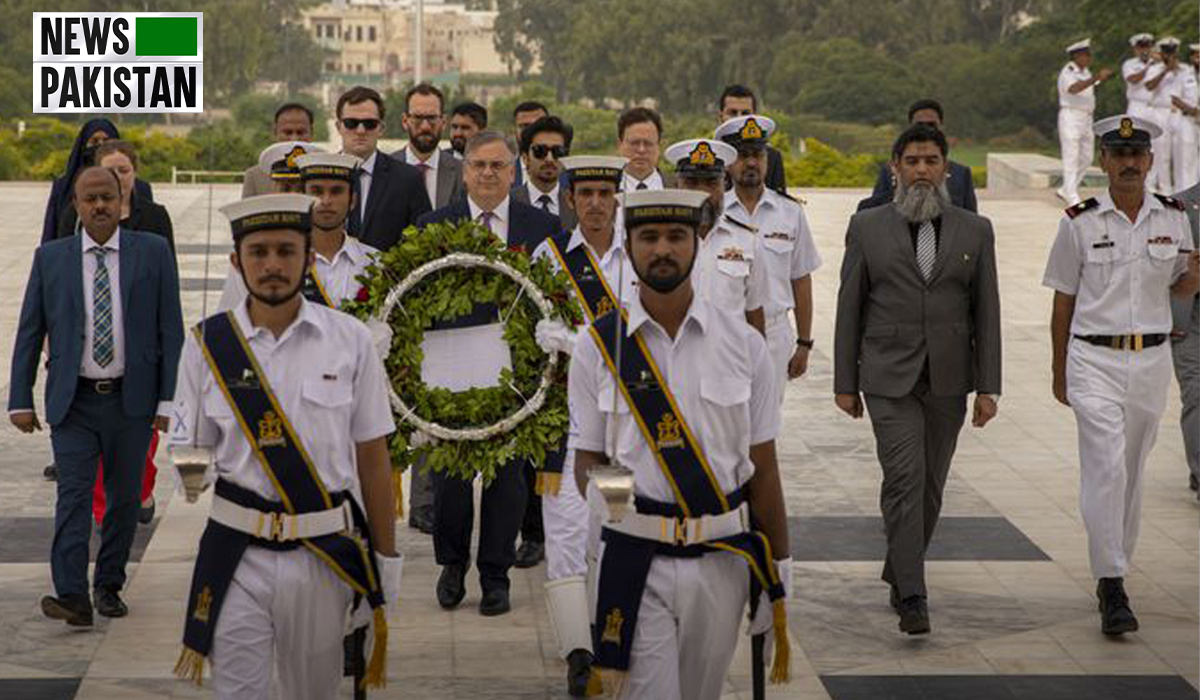 KARACHI: US Ambassador Donald Blome visited Karachi from 10th to 12th of August, 2022 to further strengthen the robust economic partnership and bilateral trade between Pakistan and the United States.

“It is a great honor to be here at the Mazar-e-Quaid to pay my respects and commemorate the legacy of Muhammad Ali Jinnah.  The United States shares Quaid-e-Azam’s vision of a unified Pakistan, at peace with itself and its neighbors, a Pakistan of religious tolerance, economic prosperity, and social inclusion,” Ambassador Blome noted while signing the  guestbook on behalf of the US Embassy in Islamabad.

During his visit, Ambassador Blome met the Federal Minister for Maritime Affairs, the Chief Ministers of Balochistan and Sindh, the Administrator of Karachi, the Commander of Pakistan Navy Pakistan Fleet (COMPAK), government officials, financial and business leaders, trade and energy executives, and other business and commercial representatives.

In his meeting with Sindh Chief Minister Shah, Ambassador Blome announced the United States was providing a new $1 million grant to build the resilience of agricultural communities in Sindh Province, and support Pakistan’s disaster management authorities in Sindh, Khyber Pakhtunkhwa, and Gilgit-Baltistan provinces, to better respond to future disasters.

Ambassador Blome and Karachi Administrator Murtaza Wahab discussed the impact of flooding and other challenges in the city, as well as opportunities for growth including in the information technology sector.

Ambassador Blome visited Port Qasim and met Federal Minister for Maritime Affairs Faisal Subzwari.  H.E.  expressed interest in how the United States can work with Pakistan to develop more linkages with US port and maritime institutions.

During the Ambassador’s meeting with COMPAK Vice Admiral Ovais Bilgrami, he further discussed relief efforts in flood-stricken areas and affirmed the importance of the US-Pakistan military relationship and the desire to strengthen and expand our ongoing security cooperation.

H.E. met other US and Pakistani business leaders to show his commitment to promoting US. business and investment in Pakistan through a wide range of effective services, products, and programs.

The US government is dedicated to expanding the ties between the Pakistani and American people to promote a more stable, secure, and prosperous future for both the nations.

Bilateral trade reached nearly $9 billion in 2021.  The United States is Pakistan’s largest single country export market and one of the largest sources of foreign investment, with US direct investment growing by 50 percent in the past year.

US companies and their local affiliates are among Pakistan’s largest employers, with roughly 80 US companies directly employing more than 125,000 Pakistanis, and more than one million Pakistanis employed indirectly.  In 2021, US firms invested up to $5.7 million in corporate social responsibility initiatives in Pakistan.

One of the highlights of Ambassador Blome’s time in Karachi was a visit to the Lincoln Corner Karachi at Liaquat Memorial Library where he inaugurated the StartUp Lab! along with Minister of Sindh for Education, Culture, Tourism, Antiquities and Archives, Syed Sardar Ali Shah.

“The StartUp Lab! is unique and a one-of-a-kind space in Pakistan where aspiring entrepreneurs with an idea for a startup business can turn ideas into reality using the latest technology and equipment for free,” noted Ambassador Blome.

“The people-to-people ties between the United States and Pakistan are among our greatest strengths.  We are proud to partner with the Culture Department of Sindh to ensure young Pakistanis are prepared to face 21st century challenges,” said Ambassador Blome.

The Lincoln Corner Karachi is one of 18 in the US Mission to Pakistan’s network of American Spaces nationwide that offer free educational and cultural programs, as well as technology and information resources, to young Pakistani leaders.

Ambassador Blome also visited Frere Hall in Karachi to appreciate its architecture and murals.  There, he was given a tour by representatives of NGO Sindh Exploration and Adventure Society (SEAS), Dr. Asma Ibrahim and Dr. Kaleemullah Lashari.

SEAS received in 2021 a  grant from the U.S. Ambassadors Fund for Cultural Preservation (AFCP) to renovate portions of Frere Hall.  This AFCP project further demonstrates US respect for Pakistan’s rich cultural heritage.

Commenting on his visit Ambassador Blome stated: “I am glad to be back in Karachi, a financial and commercial hub with tremendous energy. This year marks the 75th anniversary of U.S.-Pakistan bilateral relations and I look forward to strengthening U.S.-Pakistan partnerships in trade, investment, clean energy, health, security, education, and other mutually beneficial priority areas.”