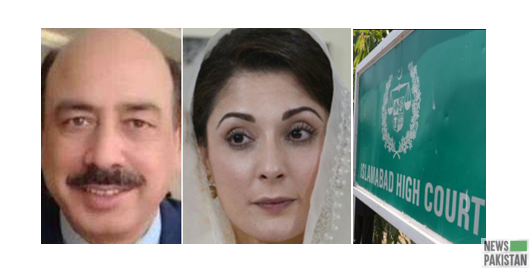 Malik was removed on 12th of July, 2019 when PML-N’s VP Maryam Nawaz presented video at a Presser claiming that he had been pressurized and blackmailed to convict her father Nawaz Sharif (deposed PM) in the Al-Azizia corruption case.

Although Malik had denied the allegations terming the leaked video(s) as fake and based on lies, IHC’s notification held that the disclosures and admissions made by him in his press release issued on 7th of July, 2019 and in an affidavit he submitted to the IHC on 11th of July, 2019 prima facie constitute acts of misconduct and violation of the code of conduct, which warrant initiation of disciplinary proceedings against him. Due to above reasons IHC CJ has ordered to place him under suspension and repatriate him to the LHC (his parent dept.) with immediate effect for disciplinary proceedings to be conducted in accordance with law.

The chief justice said in his remarks that the federal government is protecting Arshad Malik by not reverting his service to Lahore, and stressed that his conduct brought shame to all judges.

Justice Asif Saeed Khosa said judges of such characters can be blackmailed by many people and expressed annoyance that he visited the suspect’s home after issuing verdict.

“Many aspects regarding Arshad Malik’s character need to be analyzed and the SC will overview the judicial elements itself.”

ISLAMABAD: Mian Tariq, the man who had allegedly made secret video of Accountability Court’s judge Arshad Malik, has been arrested by FIA’s Cyber-Crime Wing from here today when he attempted to go abroad.

He was produced before a Civil Judge who has approved his two-day physical remand.

It has been alleged that Mian Tariq  used to arrange parties in Dubai inviting important people. He secretly filmed them with an intention of blackmailing them in future.

FIA has claimed to have recovered secretly filmed clips of fifteen politicians and a number of high government officials. Mian Tariq’s connections had enabled him to procure clips of activities carried out inside the State Guest House.

ISLAMABAD: IHC’s acting  Aamer Farooq has today directed the registrar office to write a letter to the law ministry recommending that Accountability Judge Arshad Malik be relieved of his post and repatriated to parent dept.

The decision to remove Arshad Malik has been made in light of  section 5A of the National Accountability Ordinance.

According to sources Arshad Malik had approached Justice Aamer Farooq by means of a correspondence and an affidavit claiming that the videos presented by PML-N VP Maryam Nawaz were fake.

It is pertinent to mention here that on 4th of December 2018 Arshad Malik had handed over seven years in jail to ousted PM Nawaz Sharif in the Al-Azizia Steel Mills corruption reference case.

On 6th of July, 2019 daughter of convicted Nawaz Sharif, Maryam Nawaz who happens to be the Vice President of PML-N, had presented a secretly made clip  at a Presser claiming that manifested that Arshad Malik was pressurized and blackmailed to give a verdict against her father.

On 7th of July, 2019 Arshad Malik had issued a Press Release saying that the video was fake and his said verdict was made sans any pressure or blackmailing.

In response Maryam Nawaz had presented more footage to substantiate her claim that Arshad Malik was forced to convict deposed PM Nawaz Sharif.

As soon as the IHC’s decision about removal of Arshad Malik was made public, Maryam Nawaz stated that her allegation regarding pressurizing the judge was thus proved and it should be made part of Nawaz Sharif’s appeal for acquittal. 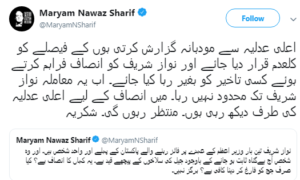 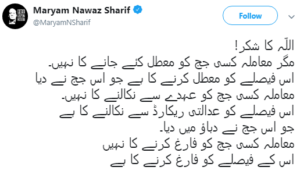 ISLAMABAD: Accountability Court Judge Arshad Malik who is in his court’s chamber at the moment has, by means of a Press Released (typed in Urdu) rejected PML-N allegations that he gave verdict under pressure. 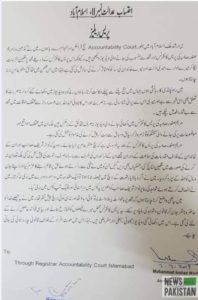 Stating that the clip shown at PML-N Presser was forged and was an attempt to malign him and his family Accountability Court Judge Arshad Malik held: “This press conference was held merely to make my decisions controversial/disputable and to gain political advantages…The videos shown during the Press Conference are fake and based on lies and assumptions. Therefore, legal action should be taken against those individuals involved in this.”

Yesterday (on 6th of July 2019) Vice President of PML-N Maryam Nawaz at a Presser claimed that the Accountability Judge Arshad Malik had been blackmailed to give verdict against her father Nawaz Sharif in Al-Azizia reference.

Commenting on the video, Arshad Malik said that serious allegations were made against him and it was conspiracy to affect his credibility as well as that of his institution and his family and therefore he wanted to present the facts: “I am a resident of Rawalpindi where before becoming a judge, I worked as a lawyer. The individual shown in the video, Nasir Butt, is also from the same city and is an old acquaintance. Nasir Butt and his brother Abdullah Butt have met me many times at numerous instances.

“The video shown in Maryam Safdar sahiba’s press conference is not only contrary to the facts but it is also a despicable attempt to mesh together various instances and topics spoken about, and to present them out of context. Had I announced the verdict under pressure or over greed of bribes, I would not have acquitted him in one case and convicted him in the other.”

Maintaining that the objective of the Press Conference was to put pressure on the court of law, Accountability Judge Arshad Malik stated that the truth was contrary to what was claimed. Arshad Malik said that though he was warned of severe consequences he gave verdicts according to law: “…during the hearing of the cases against Nawaz Sharif and his family, I was repeatedly offered bribes by their representatives and also given threats of serious consequences if I did not cooperate…I decided to stay committed to the truth and left my life and wealth in the hands of  Allah. Had I announced the verdict under pressure or over greed of bribes, I would not have acquitted him in one case and convicted him in the other.

“While dispensing justice, I announced conviction of Nawaz Shairf on the basis of evidence in the Al-Azizia case and acquitted him in the Flagship case…I also want to make it clear that indirectly or directly, neither was there any pressure on me nor was there any greed…I made these decisions knowing Allah is omnipresent and on the basis of the law and the facts.”

It is pertinent to mention here that on 4th of December, 2018 he had acquitted Nawaz Sharif in Flag Staff Investments Case maintaining that there was no case against Nawaz while convicted him in the Al-Azizia Steel Mills corruption reference. Accountability Court Judge Arshad Malik had handed Nawaz Sharif seven years of jail, fined Rs. 1.5 billion and US$ 25 million and barred him from holding any public office for a decade.

Trump’s Paki-bashing results into deferral of talks and bilateral visits!